It is popular to start strength training with some sort of linear program, like the aptly named Starting Strength program by Mark Rippetoe</a>` and in general, this is a good idea, as it produces consistent results across all age groups and genders. When these programs stop working, many people switch to the Texas Method or to a Heavy-Light-Medium model, where instead of realizing strength increases from training day to training day, you realize them at least on a week to week basis. In particular young human males eating enough food and getting enough sleep can milk these models for quite a long time and run with them for half a year or in some exceptional cases even tweak them to work for over a year.

At some point these week-to-week gains will cease to come in and unless you already have an experienced coach, you have to find a new training program. So until now, you increased your max first from day to day, then from week to week. It appears logical that you should seek out programs which produce results from month to month or even fortnight to fortnight. While there are quite a few programs seemingly yielding this progression, this is a fallacy and sets you up for program hopping or at least suboptimal growth. Instead directly jump into block programming.

It is not only about stress and recovery

As mentioned in my post about the Texas Method and HLM, the foundation of any training is the completion of stress and recovery cycles to induce supercompensation. This however is only half of the story. As it turns out, to build muscle you have to mobilize this huge molecular machinery, so your RNA can turn protein into precious muscle in the most efficient manner. Clearly, you almost always have some sort of synthesis of contractile protein, but for maximal effectiveness, you need the whole machinery. However, to produce maximal force, you need to train in a manner which does stimulate this machinery to a much smaller extent. Think of it like building a pyramid (or any other sort of prestige project): Think of muscle as being the stones itself, piled up on a huge lump, while the display of strength is the whole glorious pyramid, sans of construction equipment, with finely chiseled ornaments, embraced by the setting sun, pleasing the Pharaoh. Now of course, the construction process does not make a nice sight, for there is dirt and equipment and slaves around, so whenever the Pharaoh comes to bathe in its glory, people will make an effort to hide construction equipment and the such and this disrupts work for quite a long time, even if the Pharaoh only comes to visit for half an hour (this analogy sounds to tremendously stupid, but sadly this is what politicians and middle managers do all the time).

To get to the point, whenever you train for strength, you take away from the machinery building muscle. It is essential the opportunity cost, and as it turns out, this cost is significant.

For hypertrophy blocks the shortest duration which seems to work is about three weeks. Add a deload at the end of the block and we talk four weeks. Anything below that is probably just too short to ramp up the molecular machinery and actually gain from it. There does not seem to be a upper limit on the effectiveness of hypertrophy phases, with the following in mind: As you train with higher and higher training volumes, your body gets accustomed to these stressors and desensitizes. It is beneficial to resensitize it with a few weeks of lower volume training after three to six months. Other than that you could also bodybuild until your eyes fall out. This is also not the worst tactic, especially if you are a female and have a harder time building muscle, as Marisa Inda demonstrates currently. She did bodybuilding for about twenty years and now holds in her weight class a world record total, won the IPF 2017 worlds and is charming, eloquent and adorable to boot. Also she outlifts about 95% the guys I know at 50-ish KG bodyweight.

For strength blocks we again have some sort of minimal length and although I had some success with two weeks of balls to the walls, again allocating some time to deload and also some to ease into it, we see four weeks at a minimum. Also there is some sort of maximal length for a strength block, after which you exhausted the mainly neuronal adaptions and regained your skill. This correlates mostly with your top-end strength. A small and weak lifter might not get much out of more than four weeks, while six to eight weeks seem to work fine for anyone but the heaviest and strongest lifters, which need a lot more time to work to their maximal strength levels. But if you're squatting in the 300s or 400s of SI kilograms and not only inferior imperial pounds, you are probably not reading this article.

Depending on your sport there might be other blocks to consider. In powerlifting, there is the peaking block, which should run from a few weeks, with a taper before the meet, to a few months if you are very high level heavy lifter. This is where you get into the specifics of doing single repetitions, under competition rules. If you are only supplementing your usual sports practice, you probably want blocks for some sort of explosive training. Here the benefits actually seem to taper off after even short periods like three weeks. And if you are just going to the gym to become a fitter and stronger you, you do not really need anything besides hypertrophy and strength blocks.

Also note that for other sports block arrangement and layout may differ greatly. While for the strength athlete a strength block might be centered around sets of three, an athlete in some other sport might benefit of just a few heavy singles before a competition, as this rapidly increases force output and the drop in volume might even also decrease fatigue.

If block programming is superior, why do we do linear beginner programs?

First of all, not everyone does this. Especially in the former soviet union children go through a much more elaborate and thought out system for physical education, with general sports practice being in focus in their youth. However, it is still a very efficient system to put on a lot of muscle on trainees in a short amount of time, despite its shortcomings. On one hand, the beginner athlete is much less resistant to muscle growth, so a less specific stimulus is okay. On the other hand, it is a matter of skill to apply tension and other stressors to the muscles. If you try to push a weight to failure at around ten reps, the beginner will either totally underestimate the amount he needs to do, especially if it is a woman (as they can push reps far harder than men), or break down in form to make the last few reps. Here the classical three sets of five with preprogrammed progression is much more useful: One, it is easier to keep form on five repetitions instead of eight or ten. Two, if you did three sets of five last time, you have to make a small weight jump this time, so at one point you will lift to your actual capabilities.

Where to go from here

Okay, which block periodized programs a good? As already noted in my post about different rep ranges, I am not a big fan of Jim Wendler's 5/3/1 for its lack of total volume. Indeed the Juggernaut Method by Chad Wesley Smith (who besides being an impressive and well spoken specimen himself, has coached Marisa Inda and many other lifters dominating the sport) has some roots in 5/3/1 and heavier on volume and has more backing in sports science. Right now this would be my go-to solution for all but the most recovery-disadvantaged athletes. Also Chad knows a thing or too about other sports, much more so than almost any other lifter, and has appropriate programming ideas for people who only want to lift to supplement their usual training regime. While certainly a good idea to buy Chad's book you can also find the program itself with a quick google and lots of good advice on his site. So this cumilates probably in the ugliest infographic not involving diet advice: 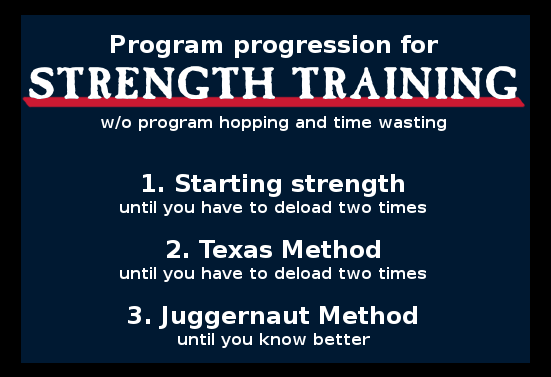