Although you never should change a running system, after my last successful experiment with block periodization, I tried out Sheiko's cookie cutter programs, namely #37 followed by #31. Mainly because my girlfriend made good progress on #37 and #30 (#31 being for people over 80kg) and was always asking when I would finally try out Sheiko, as she was eager to know how it would work for me.

The setup for Sheiko is quite simple. You get a huge spreadsheet, where you enter your maxes for Squat, Bench and Deadlift in one sheet and then you have one sheet for each of the programs, where you can pick from. So apparently I lost the source to the spreadsheets, but at least the version for lighter lifters (i.e. those under 80kg) can be found in the pinned posts of the Sheiko forums. Or you use his app or ask someone who has the spreadsheets. Given that I barely missed 120kg on the Bench after my last cycle (butt came off the bench a bit), I entered 165kg, 120kg and 200kg. The Deadlift number was conservative, as I peeked at the workouts waiting for me. Given that I was sick when I missed 170kg on the squat, that number might also a bit deflated, but one of the few things almost everyone agrees on is that one can better waste one cycle going too easy, than losing momentum and running into a wall by being greedy at the beginning of a new program.

The hardest part was really printing the sheets out, for libreoffice's weird way of hiding the option to scale the printing selection to page size. Fuck do I hate GUI applications. 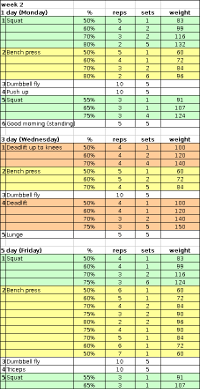 The first time in years that my training was so complicated that I had to do printouts.

Note that the usual recommendation is to do #37, #30/#31, #32, where #32 serves as competition preparation. However my girlfriend had to deal with quite a bit of detraining on #32 and we figured, that at least in the first cycle one should omit this one, as we are already going lighter than probably necessary.

Rough outline of the training sessions

Sheiko has by far the most complex loading patterns of all cookie cutter programs out there, however, a few patterns emerge. First of all, these programs are classical three day a week programs, with Monday and Friday dedicated to Squat and Bench, Wednesday dedicated to Deadlift and Bench. Characteristic is that on most of the days you perform at least one lift twice, i.e. on the very first day, you Bench 5×3 in the top set, then you do some squats, followed by chest flies and then you Bench again 4×6, followed by a bit more assistance. For deadlifts you often use pulls from blocks or deficit pulls. Furthermore, you do many sets with comparatively little weight and you often have to change the weight, so that one is sometimes in a hurry to keep the training session under two hours.

The specificity of the assistance work is painfully high. Good mornings, seated good mornings, lunges, ab work and at least heavier lifters get some variety with a few sets of leg presses in #31. Upper body assistance consists mainly of chest flies, dips, chest flies, sometimes a little bit of triceps work, chest flies and a set of incline bench and close grip bench here and there.

When it came to squats, #37 was absolutely horrible. The weights were just too light. I am not sure if it was because my max was maybe deflated or because that is actually the plan, to force one to practice good technique with weights which are so light that the weight does not automatically enforce some kind of technique. The first few weeks the working sets were all below my previous warm up weights and consequently, I did not feel warmed up during the work sets or sometimes afterwards, and this was even after my usual warmup of a few minutes on the cardio rowing machine and some back extension.

This got better in #31, where the weights finally got appreciable. Not hard yet, but it will be definitely get at least a little bit challenging in the next cycle. At least my technique seemed to improve. However, I am not quite sure how it would work out with bigger weights.

Also I found always that my hamstrings were a little bit neglected. Although you would usually do good mornings twice a week, I have a hard time to get them to work for the hamstrings and not the glutes. Furthermore they are more difficult to do than Romanian Deadlifts and consequently I could not use as much weight. This means I could not stretch them as hard as I wanted to, at least not against at least some contraction. This problem should go away as I practice good mornings some more, though.

The upper body work in Sheiko is surprisingly brotastic. Well, you don't do any targeted biceps work, but bench every session and except for two or three sessions you always do some chest flies, topped off by the occasional set of dips or triceps work. Given that the average serious gym goer does nothing but bench, chest and biceps and outbenches the average powerlifting trainee, it is not surprising that my bench felt stronger than before; even though the work sets seemed incredibly light and where programmed about two reps lower than what I would have thought is adequate, my bench did not take a dive and even though it was not called for, on the last heavier bench day I could easily establish a new PR of 120kg after the work sets.

Also the way you would bench is often annoying. Several sessions consist of long pyramids, starting with 50% of your max for a few reps and going up for five, seven or even more sets, hitting a few easy singles with something like 85% and then going back all the way down, this time with a few more reps. In fact bench presses only where hard if one held the rest time quite short; even just taking a leak and getting some new water would mean that the next set felt as if you had just begun benching.

However, doing all those chest flies and absolutely no shoulder work was boring as hell. In some places it seems the right thing to do, as it works as pre-exhaustion before the next set of benches, in other places I will sub it with more interesting work in the next cycle. Or even the occasional set of presses, because I really miss those.

The only thing that was even more boring than the chest flies were a few sets of push-ups in the second week. While this exercise sure has some benefit to it, it feels utterly disrespectful to waste my precious gym time with such equipment less bodyweight stuff. No steel, no fun.

For Deadlifts I already used quite a conservative max, but to no avail. In particular deadlifts from blocks were much harder than anticipated, and the work before the highest work set often already drained too much energy so that what else would have been an easy ×3@8 became an ugly ×3@10. I am not quite sure why that is the case. My girlfriend actually had the opposite experience and had to increase the deadlift max she entered quite early because it was just too easy.

Notable is the complete absence of back work. Sure, some people think deadlifts from blocks would be back work, but as far as I can tell, they target the hamstrings, as one takes out the quads in the push from the ground. So the hamstrings have to pull from a dead stop, which is much harder than from the already moving weight. But this might also vary with your personal weaknesses, but unless you are a woman, chances are that your hamstrings are the weak spot in deadlifts, not your back. Ladies on the other hand develop their upper body musculature slower than their lower body musculature, so that it always seems to be a bit underdeveloped.

Conclusions and changes to the next cycle

Overall I've gotten stronger. In the bench I could realize a small PR, on the squat I guess it needs a little bit more prep to get a PR, but it should be there nonetheless. Only deadlifts worry me, as a few singles with 180kg in the last deadlift session felt as hard as max lifts. In the next cycle I will run just a pretty simple linear periodization on deadlifts and sub the deadlift variations with Rows, RDLs or some other assistance, as I see fit.

For bench and squat I only increased the maxes for the next cycles; bench an optimistic 5kg, squat a careful 7.5kg. The main differences will lie in the assistance work, which I will modify along the way. Many sets of flies will be replaced by similarly programmed presses and instead of lunges or leg presses I will probably focus on front squats, as leg presses just hurt my knees and back and lunges are simply annoying and have less ROM at the knee.

It is interesting to note that, except for Deadlift, all my top sets worked out on the RPE scale as something between @6.5 to @8 and only in rare instances it would creep up to a @9. This is about one RPE lighter than what I would ususally do and I might try setting up the next volume block in a similar way.