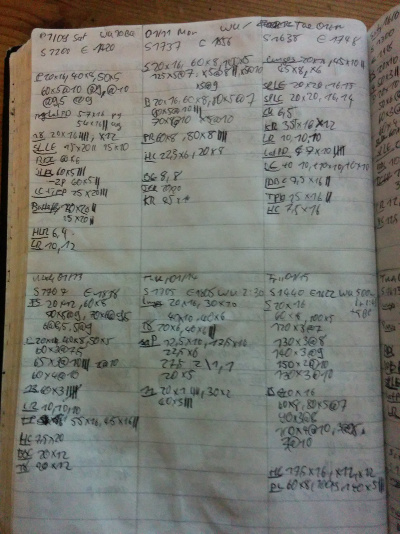 As promised in the last post, I want to do a post mortem of my current training cycle. But first let me talk about my previous training cycle, where I did some (blatantly obvious?) mistakes, as well as consequences I have drawn from it. Because you know, there are always people talking about the scientific method as if it where something of metaphysical importance, but then they just jump to conclucsions post ex, instead of forming hypotheses from previous observations and then at least qualitatively testing them.

Last year I tried some structured programming with higher reps, i.e. something along 8 – 10 reps per set, but overall failed in that regard, as I only did three sets, which is not really an increase in volume if you're already used to doing five+ sets of five. The whole point of lower intensities and higher repetitions in training is to accumulate more volume, so well, that's a rookie mistake. After that I was quite pissed and also I had a lot of energy to dissipate, so I did some chaos and pain-ish training, generally training six days a week, alternating the competition lifts with smaller exercises and dealing a bit with weak points like my left leg, which caused a noticable right shift in the squat. At the end I squatted 150×2 and benched 100×4, where at least the bench was a bit of an disappointment. The squat was a little bit of an PR, as the last time I hit that number I was wearing a belt.

In the remaining weeks, I followed the general template

shifting days as needed to fit my schedule. Again, I did not really plan out the weights and only tried to slightly increase the weight on the bar each week.

Actual lifts in the volume block

I aimed for six reps in the Bench over a few sets on Mondays, and five sets of five for squats on Tuesday, while dropping the reps to about four on Fridays and trying to get a few sets in with a bit more weight. That worked quite well, although I hard a time to control my butt, so any bench set @10 had my butt in the air in the last rep. Also note that I incorporated a two count pause on the chest, at least in the first few reps of the set, which got incrementally shorter to about one count, as I already counted one on the way down. So these are the results from the volume block, only recording the top sets. In typical RTS manner, I always did one set with the reps at 90% and 95% of the goal weight.

Overall the volume block was quite successful, even hitting a small PR in the Squat in the end, but again only because the last time I hit that weight, I was wearing a belt. Transitioning from belted to unbelted lifting took about 20kg from my Squat and Deadlift, but I doubt that they would jump back on if I started using a belt right now. At least not with one training cycle dedicated to belted lifting.

However, doing a little bit of intensity work at the end of the week, as well as taking such large increases on the bench just left too much quality volume on the table, a mistake which I avoided in my current training cycle.

Actual lifts in the strength block

Now we are about to see some programmatic errors. The overall structure stayed the same, but I dropped the reps on each day and compensated by adding more plates to the bar. After the volume block I was certain to hit 155×1 or 160×1 in the squat, but let's see how I failed in this endeavour:

Again my ass got up in the bench once I passed 110kg, but the bench worked out quite well. What really pissed my off was my performance on the squat in the sixth week. But, at least in retrospective, it is quite easy to see that I did too much work in the week coming up to the day I wanted to peak. On Tuesday I had not recuperated from last Friday's workout and then I dug the hole even deeper.

I took two main things from this cycle: First, when doing volume, focus on volume. While it was not that much detrimental to vary the intensity over the week, it also was not beneficial and hence had opportunity costs attached. Second, plan for recovery when going for higher weights, especially if you plan to peak.